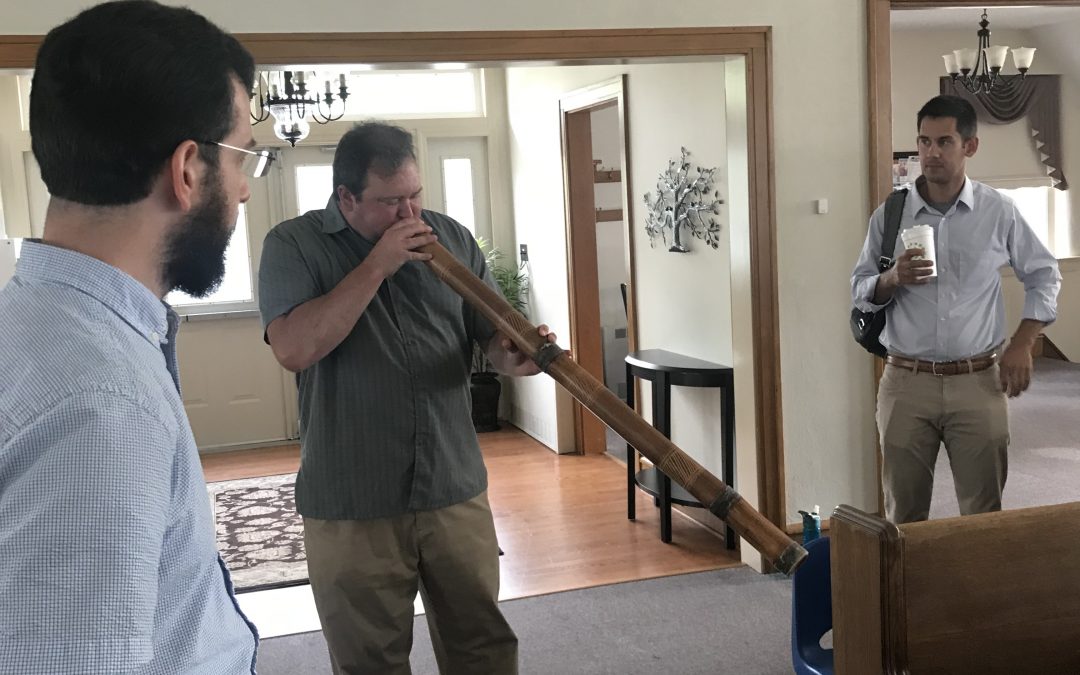 We were sad to see a few members leave for this project, but this morning the rest of us gathered at Cornerstone Mennonite Church to record Christmas songs! Perhaps multiple people suffered from a short night of sleep after some after-concert lounging at McDonalds the night before. Wendell led out in bringing us to the present – to be present. Someone said they felt encouraged. Someone said contented. Someone said exhausted – yet satisfied.    Speaking for myself, I had a lot of fun today. After our concerts last week, singing Christmas hymns – which were already familiar or easy to learn – was relaxing. We practiced songs, cleaning up diction and tuning needs, and then took recordings of a number of them. Brad Zabelski joined us with his recording equipment, as well as his didgeridoo instrument, which he played for us. (I had never heard such a thing before – quite interesting!) Faith and Fonda Showalter also joined us to shoot videos of the choir. I tried to remember not to raise my hand when I made a mistake. 🙂 Near the end of our day, a downpour of rain delayed further recording. Stanley Sensnig and his family from Lehman’s Street laid out a delicious and visually appealing lunch for us! At suppertime, many of us headed to a local high school to eat a savory supper from Velma Brubaker, mother of alto Regina, and some of her family. Meaningful conversations and volleyball followed.     Lots of singing and figuring out beautiful sounds and chords awaits us tomorrow… 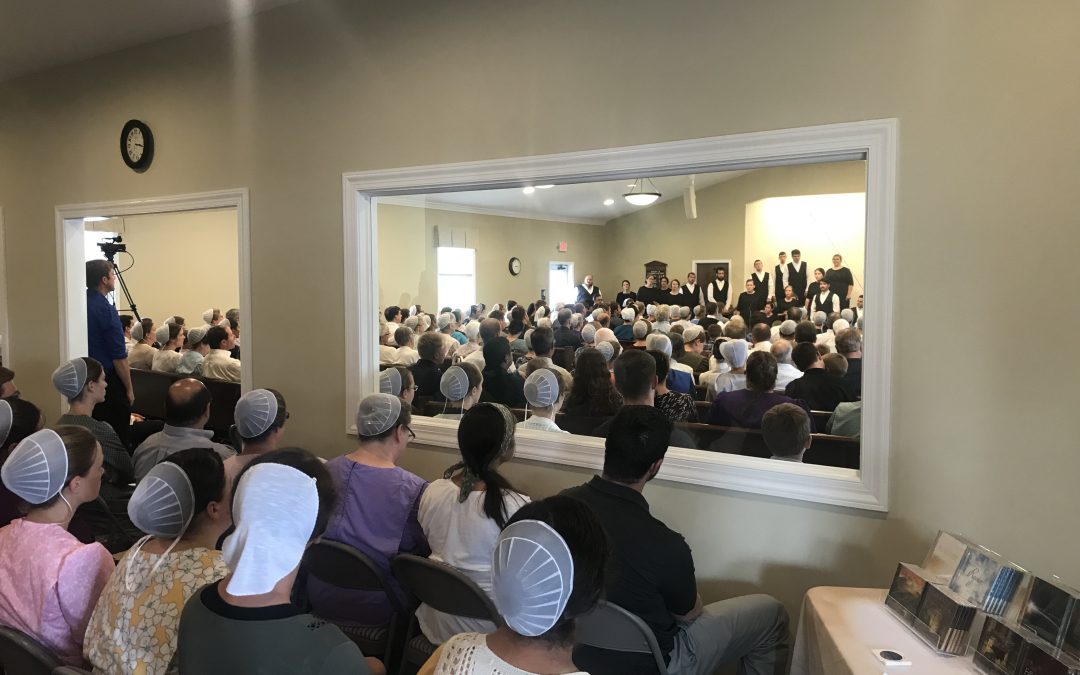 Sunday morning July 11th we assembled the troops for worship at 9 am with the Calvary Mennonite congregation.  We have suffered a few vocal casualties and a couple directionally challenged casualties as well.  Calvary welcomed us with open arms and we participated as best we could while wiping the weariness from our eyes.  Those that could muster the energy then proceeded to sing a couple songs from our repertoire for the congregation.  After the service the congregation was kind enough to have an amazing meal prepared for us.

Due to a time crunch we had to hurriedly eat and then race to Blue Ball Mennonite Church for our first of two engagements for the afternoon.  We arrived at 12:30 pm and went straight into logistics and rehearsal.  We were now once again at full strength and ready to forge ahead.  Concert was scheduled to begin at 3:00 and the church was nearly full by 2:30, so by start time, they had people in the basement watching on a screen!

Another successful concert had concluded and we are able to interact with the audience for a few moments before we hurriedly moved out for our next and final concert which was scheduled for 7:30 pm at Cornerstone Mennonite Church.  We arrived at Cornerstone at 5:00 and ate a quick supper before gathering for as much rehearsal as possible.  The doors are opened to the long line formed outside, and the church fills rapidly.  Another packed and rather warm concert is now in the books and I am left here thinking where has this week gone?

I am always so grateful for this awesome group of friends that can get together and pick up right where we left off while making music together.  Such an incredible opportunity and blessing to be a part of such a unique group of friends.  Until we meet again! One theme Wendell has shared with us this week is “Trust the Story.” It has been encouraging to remember that God is writing a unique story through each of us, and that each of us is part of a story that’s much bigger than us.

Today began with the Oasis Chorale eating breakfast together at Shady Maple Smorgasbord. This was a place I had never been. I gathered some reactions from other choir members. “It is big,” said Chad Beery, a man of few words who had been to the restaurant two other times. It couldn’t have been said better as I was amazed at the enormous dining rooms and wide variety of food. “It’s the sheer magnitude that is so impressive,” said Jared Shetler, a tenor from Kansas.

Shetler also shared an experience that he described as “a little terrifying.” Apparently, he got lost after paying for the buffet. “All around me there were people that were very much on a mission. They seemed like they knew what they were doing. They were sitting at tables. They were going after food, and I didn’t know where I belonged.” Though he was unsettled for a moment, he soon found friends who pointed him in the right direction, and I think he and the choir very much enjoyed their visit.

Next, we were off to the Greenbank Church of Christ in northern Delaware to rehearse and give our third program. Our hosts and audience members helped make our time here extra enjoyable by their kindness and enthusiasm. I am full of gratitude and praise as I write this and reflect on the day. Remember—God is the author. In Him we are never lost or alone! 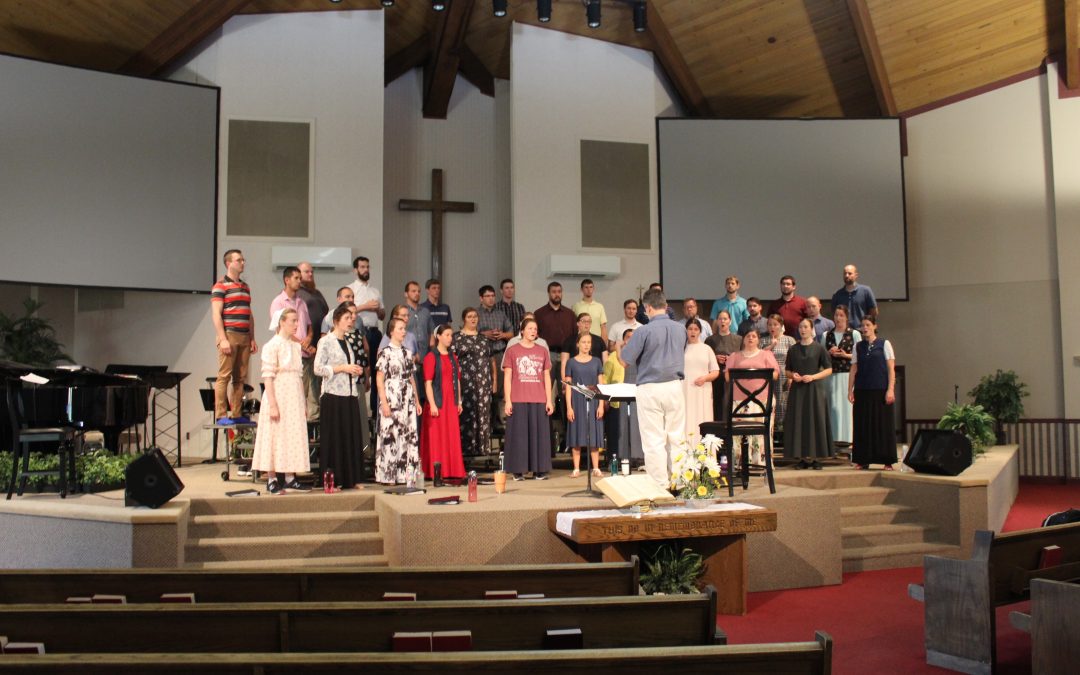 One of the healthy qualities of Oasis Chorale is the focus on development and the search to find new ways to improve. In music, as in life, there are always new things to find. Even after a solid first concert Thursday night, we could still find new things on Friday.
A couple of us guys found a local disc golf course Friday morning. Unfortunately, the local water hazards had a healthy appetite for discs! It was good for the soul to shoot a round while shooting the breeze, even though I shot myself in the foot with my drive on hole 16. I miss the informal interactions with other choir members that come with a bus tour, so this was a welcome exploit.
After finding our way to my hometown of Chambersburg for our second concert, we had a review of last night’s concert. Many things obviously went well but some not so well, whether obvious or not. Wendell continued his pursuit of finding new things. “Find the alveolar ridge,” “Find your default arrangement. No, I mean your default ZIP arrangement,” “Basses can you find the C flat on measure 21?” “Ok now find your windows,” “Find your sound!”
After a delicious supper and a thoughtful and relevant prep time, we sang. We found the space quite toasty and the acoustic a bit spacious, but the audience was gracious and the fellowship warm. It can be fun singing to the home crowd but I found my focus was lacking; it was not a solid concert for me. There’s always tomorrow, and room for improvement. Who knows what we’ll find on Saturday?

There once was a choir named Oasis.

That found pitches off in some places.

But who caused the drops,

It’s never the fault of the basses.

Thursday (July 8) was concert day! Choir members had a few hours in the morning to brunch and relax before carpooling two hours to Wilkes-Barre. My carload discussed our high school music preferences. What an enlightening topic! Along the way, it was reported that Jared discovered Istanbul Grill where the chicken donor kebab dish stole his heart and moved him to rate the dish 4.5/5 stars. John showed impressive efficiency in finishing his plate in time to reach rehearsal. Rosalie Beiler, the only alto in this particular group of tenor and bass diners, recommends the falafel.
Wilkes-Barre Mennonite Church welcomed us into their church which had beautiful stained glass windows and glorious acoustics.  After rehearsing we dined on a refreshing salad bar with grilled chicken and a plethora of delectable desserts. What an exciting day for many of us who have not had the opportunity to sing a concert in many months. Despite a few missteps and mistakes typical to a first concert, we had a delightful time worshiping with the generous congregation of Wilkes-Barre. As we prepared to depart, the drivers of our caravan found final warnings for towing on their windshields. We had a rainy drive back to Terre Hill fraught with adventure but Wendi Martin our fearless  driver navigated our scenic route safely home.  And now, I bid you gracious readers farewell. 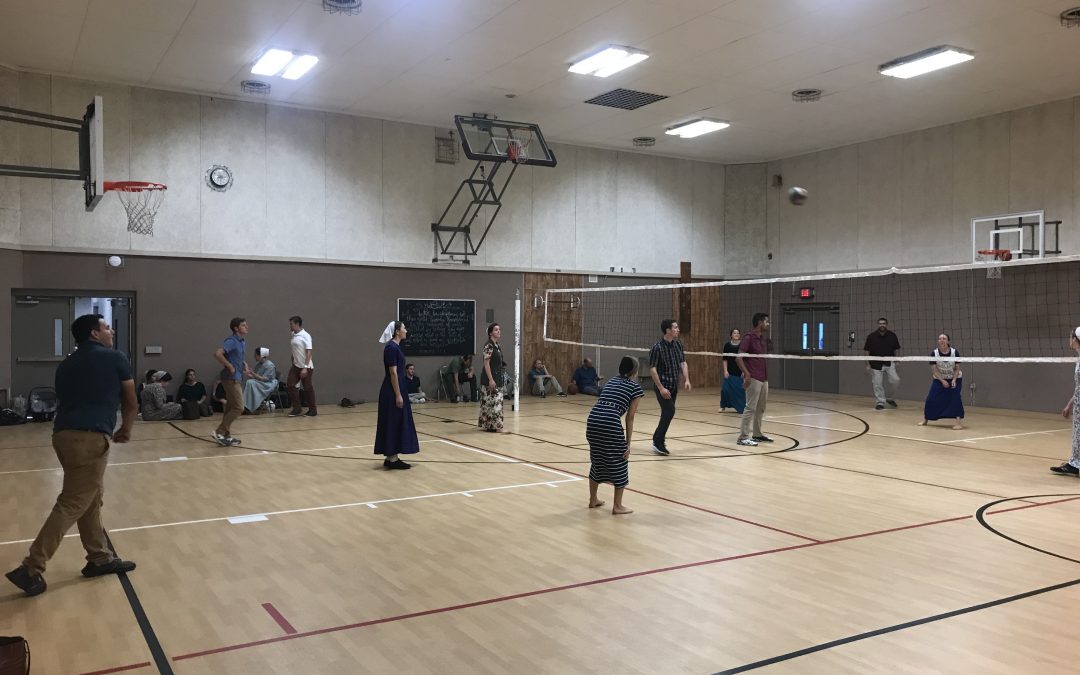 This is my first year singing with Oasis and it has already been an incredible experience. The veterans have been very welcoming, but one still has to find his place.  Linda Stoltzfus has prepared several toothsome meals one of which has been a first for me (meatball subs). Thank you, Linda!

Yesterday was very mentally taxing for myself, this was also echoed by a few others. On the other hand, we have made huge progress on the rep and I find myself incapable of formulating how excited I am to be able to finally be singing to with real people with struggles, emotions, intelligence, and souls; which excepting my family the last while, has just been in the walls of my room or my car.

We spent the evening unwinding by playing several exerting games of volleyball and basketball. We all left Terre Hill Mennonite School exhausted with hopes to find some rest before our first program in Wilkes-Barre. 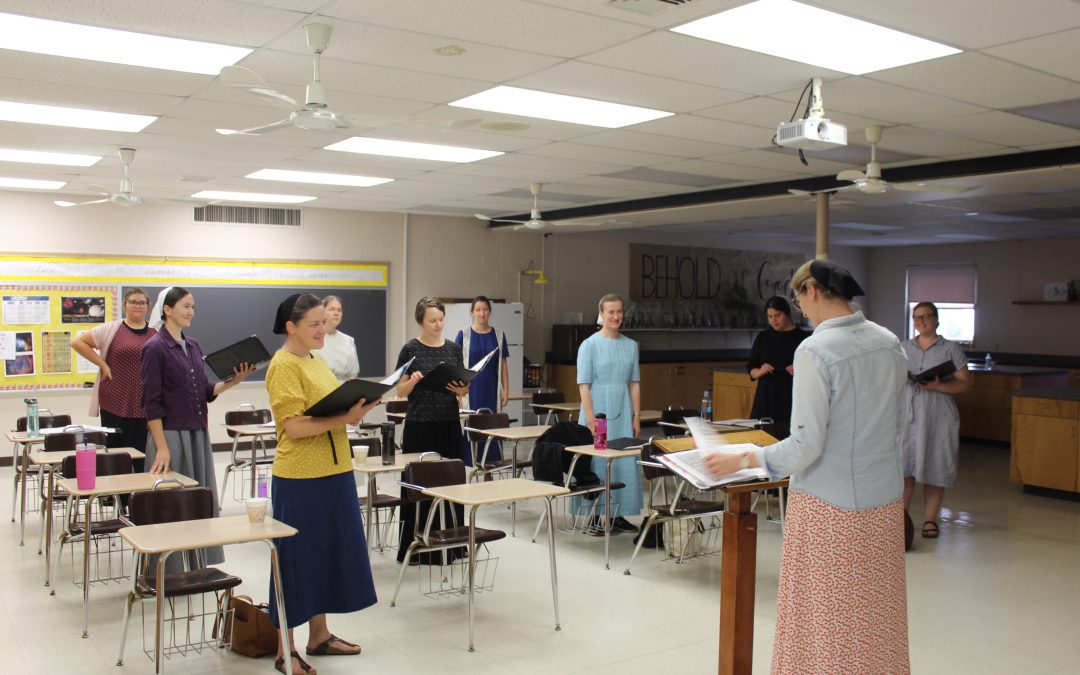 One of the refreshing things about participating with Oasis Chorale is the level of professionalism that singers show by being prompt. If rehearsal begins at 8:45 a.m., all singers arrive by 8:30 a.m., having already warmed up their “instrument,” and having engaged in some light physical exercise. In the 15 minutes before downbeat, singers greet their neighbors, hydrate, continue personal warmup (loudly), stretch, and quietly peruse music. This is a special part of Oasis culture; “meet and greet” is one of the best parts of the day!

On Tuesday we covered the rest of our repertoire in “start and stop mode,” where we work individual sections, fine-tuning dynamics, vowel, and consonant. Special attention was given to the rhythms in the three spirituals we are singing; the metronome was our constant companion! It’s understood that singers arrive at rehearsal with pitches and rhythms learned (and memorized!), and the first day or two of rehearsal is spent catching stray notes and solidifying rhythms, as we further explore text mechanics and musical interpretation.

In the afternoon, Rosemary Eberly-Lebold did a vocal coaching workshop where we played with vocal fry and discovered some really great finds with consonants (not to mention learning about how to relieve body tension!) We ended the day on stage, running rep from memory, and staging our standing arrangement for several pieces.

After dinner, singers relaxed with some exercise in the gym (we are rehearsing at a high school), while others remained in deep conversation, lingering over a meal.

We are immensely grateful for these two days of music-making, and we look forward to the week to come! 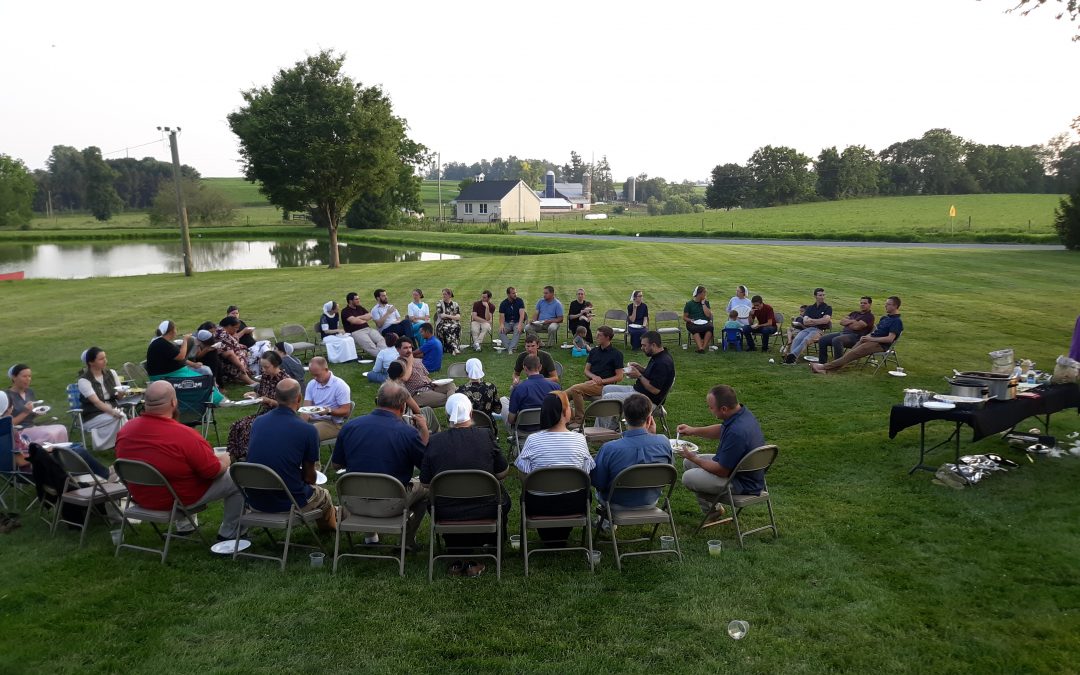 With great expectations and anticipation the 39 singers who comprise Oasis Chorale, along with Wendell their fearless leader, descended on Terre Hill Mennonite High School in eastern Lancaster County,  Pennsylvania. After a chattery half hour of meet and greet time and some warm-ups our souls (and bodies) began rehearsing the “exalted lays” we have been practicing for a year and a half.
After a delicious lunch that was so graciously provided for us by Linda Stoltzfus and crew, we began our afternoon routine which bore a marked resemblance to our morning activities.
For supper we headed south to Gap to the farm of Oasis charter members Dwight and Brenda Stoltzfoos where we were fed another scrumptious meal.
After supper a dozen of our multi-talented singers played a game of Ultimate Frisbee while a multi-tasking audience cheered them on and enjoyed the farm dog’s puppies. It’s been a wonderful start to an amazing week!